Now for the good stuff! It seems impossible for me to write about everything that has happened in just 3 days, but I’ll try and cover as much as I can for your reading pleasure!

The drive out from the airport in to Slovakia was nothing short of wondrous. The whole time I just kept thinking ‘wow, I’m actually in Europe’ and that was so insane to me. Luckily my host parents understood that I was in awe and let me look around for most of the drive rather than quiz me up in Slovak.

I wasn’t able to snag any photos, but the first part of the drive out of Austria and in to Slovakia’s capital, Bratislava, mostly consisted of gorgeous rolling fields and massive wind turbines. There was a storm going on and we actually got caught in a couple downpours on the way, which I found ironic since I was worried I wouldn’t get to see any storms in Slovakia.

The first thing about Slovakia I had to get used to really quick was the driving itself. Oh my goodness. People here drive 140-160 km/hr on double lane highway, and are constantly weaving in and out of lanes. Keep in mind, these aren’t good old straight Saskatchewan highways- they’re winding through hills and- once in Slovakia- mountains. I think my Mother would probably have a heart attack, and if I’m being honest I felt like I was warding one off the entire drive myself.

We only drove through Bratislava this time so I didn’t have much time to properly look around, but even just glimpsing the magnificent castle and the Danube river in the distance was enough for me. I hope I return there soon.

Only about 15 minutes out from Bratislava you hit the first mountain range, and it’s even more amazing than I ever could’ve imagined. Pictures don’t do justice just how beautiful they all are- even in the lower mountains which are more like really really big hills. Right when we got to the mountains we stopped at a convenience store for snacks, and I took my first steps in Slovakia (cheesy, I know). I bought a Kofola from the store, which is basically the Slovak equivalent of Coca-Cola. I’m a bit addicted to it now, I think. It’s much less sweet than Cola, and tastes almost like a mixture of Cola and really lemony iced tea? It’s different, but as soon as I took a couple sips I knew I loved it.

From there we continued driving, and the mountains only got higher and more spectacular. About half an hour out from Banská, we turned off the highway and drove down to a cute little restaurant/bakery/market type place. The restaurant part was all outside looking out at the mountains, with a fish pond right beside it as well as an enclosure with a donkey and a couple sheep. I ordered Halušky (I figured, eh it’s my first day, why not try as many new things as I can!) a traditional Slovak dish made of potato dumplings and bryndzou cheese, with pieces of bacon on top. It was very delicious, but my host parents asked me/ordered me ‘milk’ to drink and didn’t tell me until afterwards that is was a ‘special’ kind of milk that is ‘sour.’ I tried it anyways because I swore I would try everything at least once on exchange. It tasted exactly like liquid sour cream. Once was enough this time!

After lunch we drove the rest of the way to Banská Bystrica and up to my first home! It’s a cute house attached to an apartment complex type building, and it’s up overlooking the city- a gorgeous view. The whole house is incredibly clean and neat, and very modern which surprised me quite a bit. When I got there, I unpacked my bags, but I began to feel quite sick so I ended having some pepto bismol and a big nap (a poor combination of 24+ hours without sleep, lots of bryndzou cheese, and sour milk).

I don’t remember what happened the rest of that evening and following night but I think it mostly involved going over house rules with Pavol + Andrejka and then sleeping- fine by me!

The next morning, I got up at around 5:30am. My host parent go to work between 6-7 so that is when I get up as well. A bit earlier than I’m used to. Breakfast in Slovakia, much like Canada, is sort of a raid the fridge type deal. I was still finding my footing in the house and didn’t want to take just anything, so I ended up having bread and butter, leftover Kofola (#health), and what Pavol called a ‘cookie’ although how I would describe it is a rolled pastry made from a block of sugar. It was delicious- don’t get me wrong- but I had to drink a couple glasses of water to regulate my blood sugar afterwards.

My first exchange issue I had to remedy came later that morning. While the HP (host parents, from this point on) were out at work, I went for a walk around Zimná (our street + area up on the hill). I thoroughly enjoyed snapping pictures, house watching (I’m in a gorgeous area with big new houses designed traditionally), and trying to analyze all the new trees and plants I could see. However, after my 2 hours of walking I returned to the house and found my key didn’t work! I fiddled with it for a good 20 minutes to no avail and then started panicking because I really wanted to eat food and was scared I’d be stuck outside (in the blistering 32 degree heat no less) until my HP got home. However, I ended up ringing a different tenant, and after convincing her (mostly through hand motions and pleading eyes) to open the door and let me come in the lobby, I connected to wifi and used Google Translate to explain my situation, and she thankfully understood and let me off without suspicion.

Side note: turns out the key does work, there is just a very, very specific distance you have to put it in the lock in order for it to turn. I promise I’m not inept- it’s very difficult.

After my somewhat stressful morning, I ate a soup Andrejka had prepared for me in the morning, I think it was some sort of cream of broccoli and zucchini, and as per Andrejka’s urging I ate it with added pumpkin oil- it was amazing! And very comforting after my long morning. 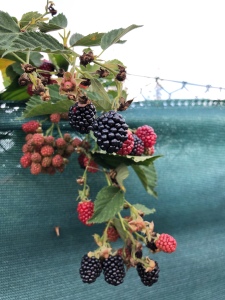 When Pavol got home from work, we walked down to a stop and took the trolley bus in to the inner city. This is how I’ll get to school, once it starts next week. (About a 15 minute walk down the hill to the stop, 10 minute trolley ride, and 5 minute walk from there to my school). We walked past my school, and from there in to the town square. WOW. I don’t think I’ve ever been in a more beautiful city. We very briefly looked in the ancient cathedral (but it was about to close and I didn’t get a proper look- so I’ll post pictures and more on it a different time) and the castle- which has been converted into a really neat restaurant and heritage site that you can explore- although I wasn’t able to this time around.

After that, we were in the heart of the square- cafés, shops, and various businesses line it- all with colourful and beautifully restored (or original) façades. You could just sit there and look at the buildings for hours (and I probably will, one day). Pavol bought me blackberry ice cream from the clock tower shop, and I swear it’s the best ice cream I’ve ever had in my life. I can predict now, that I’m going to gain at least 20 pounds- or spend all my money- on this ice cream alone. And the fact that my school is a 3 minute walk from the square only makes this delicious and addictive treat all the more accessible.

For a couple euros, I got to climb up the ancient clock tower and view the square from the best vantage point in town. Needless to say, it was breathtaking!

After some Kofola we toured around the city a bit more- past the massive SNP museum, and through the fairly new Europa mall- 3 stories tall!

On our way home, we saw even more sights (too many to remember), but we walked for a good 3 hours back home. Once we got to the very steep hill leading up to Zimná, Pavol exclaimed “you want mountains- you get mountains!” Lol. 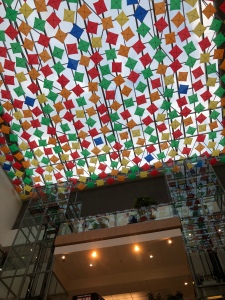 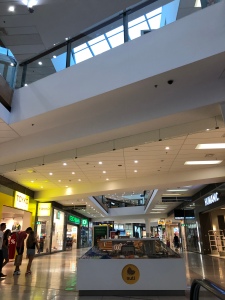 We got home, I watched Czech and Slovak television with Andrejka (I understood maybe 1/100 words) and then presented them with my gifts from Canada! They especially liked the homemade coasters my dad made (with Canadian animals engraved on them), the book of pictures from Saskatchewan, and the Canadian ball caps!

It was a great few first days. I’ve done a lot since then- but I figure this post is long enough already! To end off, I’ll just note a couple things I’ve found funny about Slovakia so far.

1. There are slugs everywhere in the evening- so weird.

2. They have so many fruit trees and berries! It makes me jealous that we can’t grow these things in Sask- pears, giant plums, limes, blackberries, and so much more.

3. I think I’m the only person in Banská Bystrica with an IPhone- all I see are Samsung’s everywhere.

4. And finally, the most shocking- jorts. There are jorts everywhere. Probably about 60% of the population of Slovakia (a rough estimate) wears them (Jean shorts for those who don’t know *cough* dad *cough). I hate to admit it but I might have to buy a pair before my year is over, if nothing else just to blend in.

That’s all for now! Next week I’ll try and summarize things better because I’ve already done so much, and I won’t be able to cover it all if I keep rambling like this! Stay tuned.