Since last month when I wrote my blog post about Banská Bystrica, so much has happened. I will try and be as brief as I can when summarizing everything that has happened, and talk mostly about the juicy stuff (my actual time so far in Slovakia). I decided to split this post in two parts for better reading efficiency- so this first part will focus mainly on my travels to Slovakia, and part two having more on my actual first days in Slovakia.

So, first, a very short catch up on August:

Most of my last two weeks in Canada was spent packing, preparing, and doing as many things for the ‘last’ time as I could. These weeks included a jam packed trip to Ottawa with Mom to see the parliament buildings and several national museums (and to fly for the first time before leaving- thank goodness I did- Toronto Pearson would’ve been catastrophic to navigate on my own), a family reunion down at Regina Beach, heartfelt farewells with many of my friends, and eating as much of mom’s homemade puffed wheat cake and apple crisp as I could (my excuse for a third serving of each was predictably lame- “what if they don’t have apples in Slovakia?” Haha). I attended a Rotary BBQ and met several Australians who were in Melfort for a rotary friendship exchange, and they gave me several useful tips on living abroad on exchange (as well as a kangaroo shaped pin for my blazer, which I love). The next day, I had my last Rotary meeting in Melfort where I was able to properly thank my host club for this tremendous opportunity that has been given to me. I am kicking myself for not being able to schedule time to go to as many meetings as I had wanted to, but I hope my graciousness is evident to the Rotary club nonetheless. 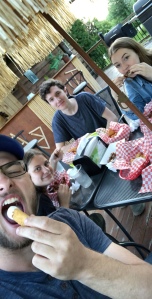 On July 20th, we drove in to Saskatoon to pick up Fanny from Belgium from the airport, the girl who will stay with my family for 4 months while I’m away here in Slovakia. Over the 4 day overlap we had before my departure, I had the pleasure of showing Fanny around Melfort, MUCC school, and warning her of my parents’ warped sense of humour and general hilarity. If you’re reading this Fanny- good luck, and I hope you have a great year in Melfort!

Saturday morning I said a heartfelt goodbye to the farm, Moxie (our dog), and all the kitties, who I will miss especially. Then we (me, my parents, and Emily) headed in to Saskatoon, met up with my sister Sadie, and spent the day walking around the river and eating at some favourite restaurants (Amigos cantina- love it!).

Then, the day had finally arrived. Sunday morning we all got up bright and early at 6 am (5 am for me, I was too nerve-cited to sleep much) and headed out to the airport. After making my way through baggage, I said a very tearful farewell to my family. To mia familia- I love you all so much, and will miss you- but at the same time I’m excited to gain all these new experiences and share them with you when I get back- and I’m sure these 11 months will fly by and before you know it I will be back, and it will seem like I had never left. With that, I headed through security and up on to the plane, and bid Saskatchewan farewell. 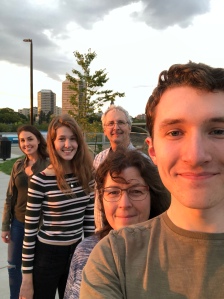 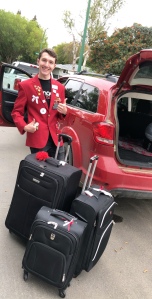 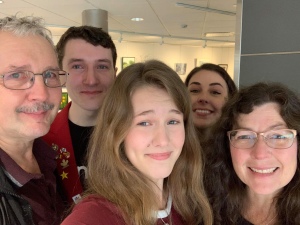 After a bumpy and emotional 3 hour flight I landed in Toronto and made my way to connections. There was a lot more people there this time as opposed to when we went to Ottawa (at 11 pm local time). After finding my gate, I looked and looked for a Tim Hortons, determined to have my last meal in Canada be my staple spicy chicken chipotle wrap. After half an hour of looking, I couldn’t for the life of me find a Timmies, and gave up, instead waiting in line another half an hour at an unfamiliar place for a ‘Toronto’ burger (which to be fair, was kind of delicious). After finishing my lunch (dinner? Breakfast? Not sure what time it was lol) I saw my gate for my flight had switched, and headed to the new waiting area that I hadn’t even seen before. Go figure that right across from my new gate, nestled in the corner, was a Tim Horton’s. Classic.

My 8 hour flight to Austria was mostly spent watching Avengers: Endgame on the plane, taking aerial view pictures of various cities, and playing around with the fancy window tinting button (how does it do that???) much to the chagrin of the friendly German lady sitting next to me (I got a few side glances for making the window too bright, but then she fell asleep so I tinkered away, trying to get the best window-tint lighting for pictures). I also spent much of the time massaging out severe knee and leg cramps. Not fun. 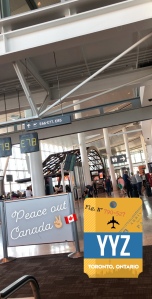 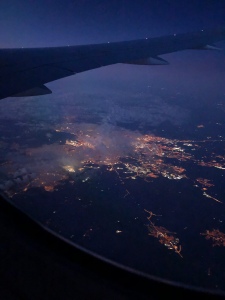 Dublin, Ireland from above.

P.S.- Europe is beautiful from above!! Unsurprising but still amazing to see, for a strictly in-Canada explorer like me. (Hey that rhymes).

Finally, after 8 long hours and zero sleep (I tried to no avail to get some shuteye) we landed in Vienna. I made my way through customs super easily (all that stress for “are you staying in Vienna?”- “No, Slovakia” – “Goods to declare?” – “Nope” – “Okay enjoy your stay, *stamp*”). Whew.

After that, I hauled my baggage down and into the airport, where I met Pavol and Andrejka Stanko, my first host family. I was so excited to meet them, and they were very welcoming and friendly with me! Even though they speak very little English, they used a translator to welcome me to Europe and to their family. After initial introductions, we headed out, and my journey out of Austria, and in to Slovakia, began! I was overwhelmed with anticipation despite having been awake for almost 24 hours, so when they asked me if I wanted to rest in the car, I had no trouble saying no, I’d rather look around.

I was now in Europe, and that is a fact I continue to struggle with believing even after 2 days of being here. Unbelievable. Exciting. Wow.

This concludes part 1! Part 2 will be up very soon with details of my actual first days in Slovakia- not just getting here.

p.s.- this is the first time I’ve tried writing a post from my phone, so if the pictures are too small to see or the formatting is weird please let me know so I can remedy it!